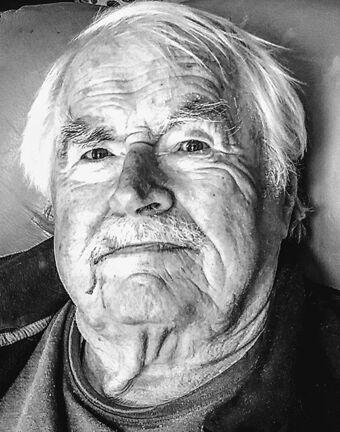 He was born in 1932 in Wadsworth, Ohio, the only child of Marvin Daniel Rohn and Esther Rohn neé Geyer.

While attending the Cleveland Institute of Art, he met fellow student Mary Grace Baker, and the two were married in 1954.

During those years, Mr. Rohn also sang as a promising tenor under Robert Lawson Shaw in the Cleveland Orchestra Chorus.

The couple lived for a time in the same apartment building as a young Roy Lichtenstein and his wife, socializing in their rooms amidst piles of Lichtenstein’s interesting, as yet unrenowned, pop art.

Facing an agonizing decision – music or art – Mr. Rohn eventually chose the latter and earned a masters of fine art degree from Yale University in Connecticut.

Mr. Rohn was a lithographer, occasional painter and photographer.

As family lore has it, at one point he served as an assistant, inking lithography stones for Jasper Johns, only to be written out of that history by a vindictive female manager who was angry when Mr. Rohn left the great artist for a new job.

After graduating from Yale, he was employed as an assistant and then associate professor at Kent State University in Ohio, a post he maintained for the rest of his working life.

On May 4, 1971, he was on campus the day Nixon called in the Ohio National Guard and four students were tragically shot dead; later, he taught art to many colorful characters including members of the experimental New Wave band Devo, and Chrissie Hynde of the Pretenders.

Mr. Rohn eventually left lithography for photography, and was part of a small but passionate movement interested in reviving platinum/palladium printing.

This art form had died out when cheaper silver emulsions replaced the more expensive metals, but the technique imparted his black-and-white prints with an ethereal tone, warmth and depth far surpassing those of modern photos.

He exhibited his work widely for many decades; one of his pieces is part of the permanent collection of the Cleveland Museum of Art, and another graced the cover of a major edition of the collected poetry of Edna St. Vincent Millay.

Each summer for decades, Mr. Rohn would drive his family from Ohio on camping holidays to various Western locations, including Salida.

Friends and family said a keen dry-fly angler, he was only marking time in Ohio each year, dreaming about fishing Chalk Creek and the Arkansas River again.

After retirement in 1993, it seemed only natural that the Rohns would relocate to Salida permanently in 1996, where friends and family said he ruffled a few feathers by promptly winning first prize in the local art show.

Due to the pandemic there will be no memorial, but donations in lieu of flowers can be made to the Central Colorado Conservancy, to help protect the land and waters that the Rohns loved so much.

Arrangements were with Lewis and Glenn Funeral Home.

Plant a tree in memory of Marvin "Dan" Daniel Rohn

A Memorial Tree was planted for Marvin "Dan" Daniel Rohn

Plant a tree in memory of Marvin "Dan" Daniel Rohn